Farmweld > Blog > News > Is a Wrought Iron Garden Arch Right for Your Garden?

When considering your garden arch design consider not just beauty, but sturdiness. If you want to plant a climber and like the idea of a wrought iron arch, it might be worth having a good think about what you really need. A garden arch should be complementary to it’s environment. Most of all though, remember it’s your plant that needs to be showcased, with the arch giving it good support. So is it worth spending money on fancy ornamental ironwork, or is it a waste of money if it’s going to be hidden under foliage? 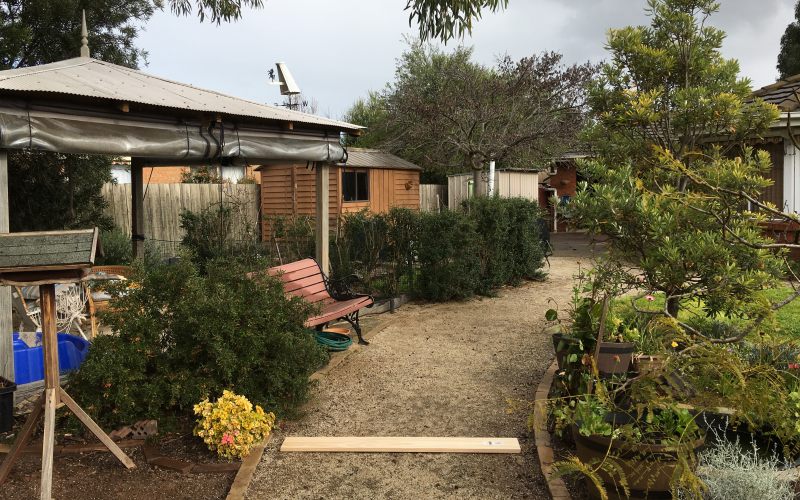 Proposed site for a garden arch over this path

Annette wanted a pretty wrought iron garden arch to go across a garden path. It needed to support a newly planted hardenbergia. She sent us an email when she found that Farmweld custom makes arches to whatever size you need. Annette told us that she had been looking for an arch wide enough to straddle a path, but couldn’t’ find one the right size at the local stores. It had to be “freestanding and sturdy as it gets quite windy, in a design to tie in with the front entrance”, she wrote.

What features should you consider when buying a garden arch?

Wrought iron on a garden arch, yes or no?

Wrought iron work on a garden arch looks lovely, but it adds considerably to the price of the arch. Tricia pointed out that the ironwork would end up buried under foliage once the plant was established.

How deep to make your garden arch?

Secondly, the Brigadoon rose arch is only 500mm deep which would probably not suit her plant. Hardenbergia’s are known to be vigorous. She originally thought that a shallow depth would be okay as the garden arches she’d seen in the chain stores were only about 300mm deep. Like many people she thought that shallow arches were ‘standard’. 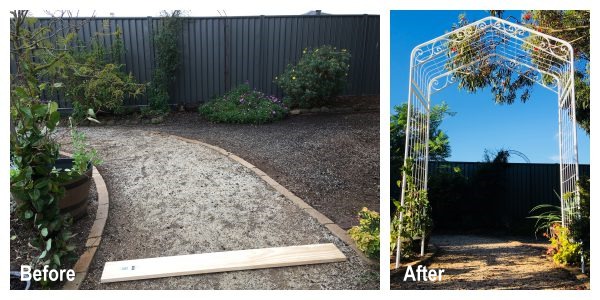 As the arch was freestanding over a path, there was a disadvantage to having a narrow arch because they are unstable. Once a plant has grown over an arch, it acts as a wind sail. Annette’s property was near the coast, so her garden got quite a bit of wind. With climate change, gales are also becoming more frequent.

The garden arch had to complement the iron lacework

Annette emailed through a number of photos of her house and garden. She told us that her home was relatively modern and had cast iron lacework on the front verandah. After exchanging some photos, and discussing the growth and mature size of her Hardenbergia, and the other factors, we came up with a design that would suit her garden.

We suggested a design that would:

This was all worked through without meeting face to face, in emails and a couple phone calls because Annette is located interstate.

After Annette took delivery of her garden arch she was rapt. She sent the following feedback…

“I wanted an arch to go across an existing path, but I could not find a store-bought one to fit. I tried looking on line, but standard sizes were not wide enough. I eventually came across Farmweld when I googled something like ‘garden arches’.

At first I was a bit hesitant because ordering anything online is always going to be an exercise in educated guesswork, not knowing how it is going to end up looking or fitting. I couldn’t find another supplier that custom-made arches so I contacted Farmweld. When I first made contact with them, the prompt reply to my initial communication was much appreciated. Just through email communication with Farmweld staff, they were able to work out what would be suitable for my garden.

I really appreciated Farmweld’s logistical organisation of interstate delivery. Being such a large item, my decision to buy the arch was also influenced by how it was going to get here. 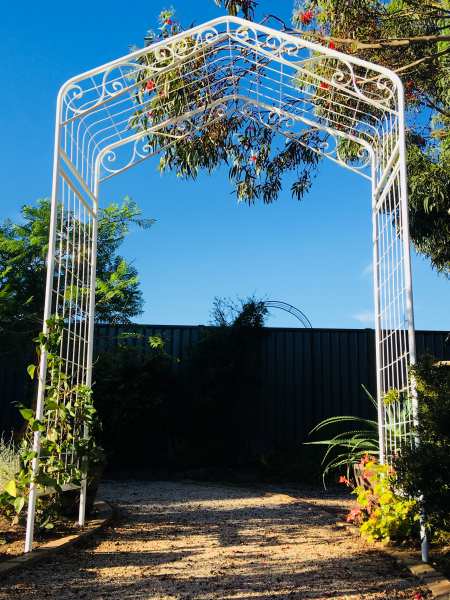 Custom garden arch with wrought iron on front and back.

The beautiful ornate garden arch I bought is now supporting the plant I bought it for. I can feel assured that my purchase will last for many years in the harsh outdoors and still look as good as the day I bought it, being sturdily built and weather protected.

I’d recommend Farmweld to anyone who wanted to have a beautiful piece of artwork in their garden, as their designs are attractive, and they are constructed to last.”

This particular arch was custom made. Farmweld has three standard profiles and offer the option of either mesh or trellis sides, with or without powder coating. If you’d like more information about garden arches, check out the page on garden arch designs for more information or give us a call on 08 8568 5433 to discuss your needs.