Quite often we’re asked if we can replicate an old heritage gate that someone’s seen and fallen in love with. The usual scenario is that you’ve got an older property which has lost the original gates but you haven’t been able to buy an old gate from anywhere. You really need something ‘old’ to suit. The one gate we’ve been asked about the most is the one shown in the Vic Tourism ad for Daylesford and Hepburn Springs. This gate graces the driveway entrance to the historic Wombat Park Homestead with it’s magnificent gardens. 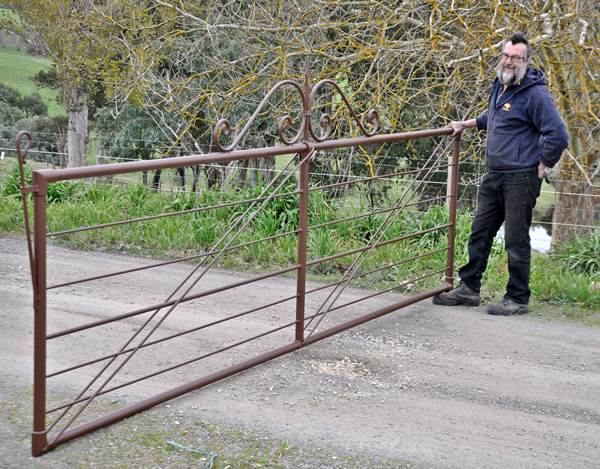 How to know if a gate is old?

The original gates on this rural heritage property are made with a heavy pipe frame. The feature which really makes them stand out however are the lovely forged scrolls and central spear on the top. They were most likely made by the local blacksmith. It’s possible the scrolls were added to the gate at a later date but it’s hard to know. The original gate was most likely made, at a guess in the late 1800’s. Photos of the original gate show some welding but the gates are also riveted. The welds on the scrolls could have been added later, as the usual way to join them would have been with a collar. That’s how Andrew has made the reproduction gate. If the collar rusted away and/or dropped off it’s possible that the gate had been repaired by a welder at a much later date. 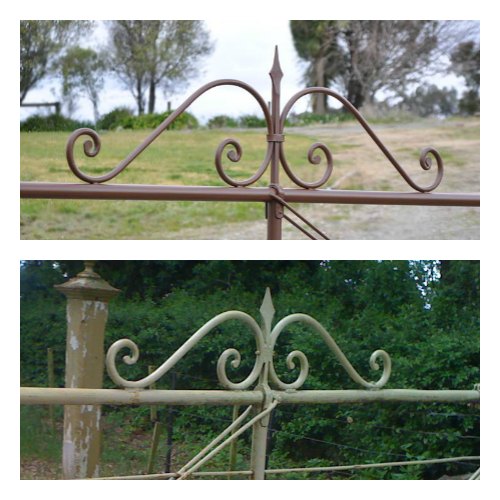 Unless you’re a blacksmith or metalworker, you may not be aware that rivets are generally a good indication that what you’re looking at is an old heritage or antique gate. Rivets were used to join metalwork before welders were around or easily accessible.The old fashioned way of welding was to heat the two pieces of metal till they were hot enough and then ‘forge weld’, but you can’t do that on pipe. Unlike modern welding, forge welding doesn’t leave a line of ‘weld’. Rather the steel ‘melds’ together and a fine line can be seen where the steel has joined or fused together. If you look closely at the diagonal braces you’ll see that they were flattened at the ends and then riveted to the pipe frame.

We recently had a customer commission this gate but he wanted it to look old and rusty. We get asked about ‘rusty gates’ alot, however what many people forget is that steel will continue to rust and deteriorate. As such it’s not exactly low maintenance. If you want your gate to last you’ll need to halt the rusting process. The best way is to use Penetrol and give the gate a coat or two once or twice a year, depending on your climate. (To find out how to maintain rusted items you can read more in another article we posted a while ago.)

Our customer didn’t want either of these things – he didn’t want it to rust away or be high maintenance. Our solution was to powder coat the gate in ‘corten’, a colour which resembles a rust colour.

Let us know what you think?

If you’ve got any information about Wombat Park’s gates we’d love to hear more about it’s history, so please share below.

We are presently taking a much needed break and will be unavailable until the end of October. We're sorry if this causes any inconvenience.