Dyson the shop dog, helps with the construction work

The blacksmithing workshop has slowly been coming together over the last six months. One of the major pieces of equipment is a Massey power hammer which makes working with heavy iron much easier, especially stock that’s 1″ thick solid bar – a necessity for some projects like large gates or tables which need to carry a bit of weight.  It really speeds up production on the smaller size stock as well, anything bigger than 10mm gets put through the hammer if possible.

We estimate the power hammer must be about 80 years old but she thumps along without missing a beat. The power hammer had to be set on a bed of concrete which was about 1.2 x 1.2 x 2m (4′ x 4′ x 6’6″) but the slave got enthusiastic digging out the hole and it ended up a bit wider than necessary and it took around 4 cubic metres of concrete to fill it. (I promise there are no bodies in there). 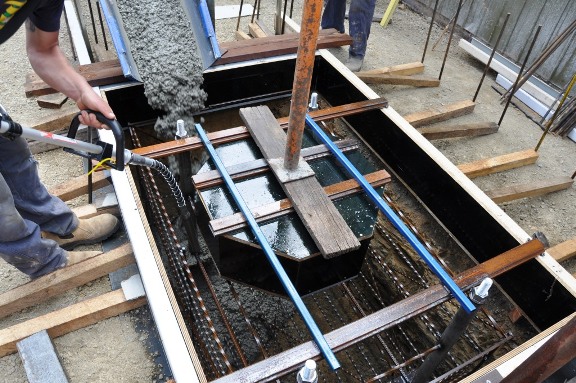 Pouring the concrete for the Massey power hammer footings – about 4 cubic metres of it.

Although the workshop is still not complete, lacking a roof and walls, a temporary shade structure has been set up so that Andrew can have fun playing with his toy. Here’s my first attempt at taking and editing a video of exactly that … a big boy with his big toy … albeit forging a beautiful scroll. You’ve got to check out the grin at the end! It makes watching the video so worthwhile.

The scroll was a practice piece for some legs which were forged up for the Inglewood Inn extension, due to open soon, so if you’re ever around the northern part of the Adelaide Hills along the scenic Chain of Ponds route, stop by for a drink or a meal and check out his handy work on the bar tables. If you’re not in Adelaide then you can see one in the gallery on the wrought iron furniture page.

It may have been a shame to squash the scroll, but he couldn’t resist the urge to demonstrate the power of his hammer. Boy, did he have fun showing just how much power the Massey has. As an aside, it was about 8am on a Saturday morning of a heatwave and it was already about 30C – he started before six while it was cool and goes to show how passionate you have to be to stand over a hot forge in that weather.