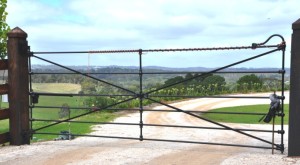 The old Sunshine McKay & Simpson gates dating back to the early 1900’s are fetching high prices at clearing sales and auctions. The Sunshine gates were made in Victoria and the Simpson gates in South Australia. It’s surprising to see some appear on Ebay in really bad shape, only to go for ridiculous prices. Could this be due to the fact that they’re becoming harder to find? I recall seeing a pair of 2.4m (8? in the old imperial measurement) gates going for in excess of $2500, some being irreparable and others needing some serious restoration work. These prices were for gates that were pick up only, which would have restricted the interest but they still fetched high prices.

Many of the original old gates, commonly known as “drag & drop” gates due to their weight, typically require a significant amount of restoration to fix badly bent and rusted away bars. I’m not sure what makes these gates so appealing, they were extremely heavy, made with solid steel bars and joined with cast iron joints. The castings on some gates were a little fancier and pretty but the ones with a steel frame and twisted wire (instead of bars) were not so attractive but still attract interest from collectors and renovators.

We ventured into adding these gates to our range after a Victorian insurance company approached us to make up a set for a customer of theirs. The cast iron joints and handle are all hand cast. We made a gate that was near indistinguishable from the original despite using modern techniques. The cast joints are from iron, and the bars are steel pipe, so not quite as heavy as the originals and a special welding technique is used to bond the cast iron to the steel giving a much smoother finish than MIG welding. Although a bit lighter than the original McKay gates, they are still very heavy at around 70kgs for a 3.6m gate. The castings are from original gates so we are limited to specific sized gates from 8′ / 2.4m through to 12′ / 3.6m.  Smaller gates from 1.2m can be made but without the diagonal bracing. Gates are available with either plain or ornamental castings. 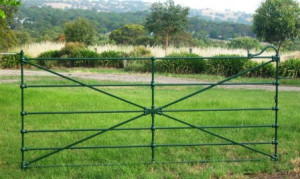 Ornamental cast knuckles and round centrepiece

All gates are custom made to fit to a maximum length of 3.5m.

For more information about these gates and our other bar farm gates, visit the heritage country gates page.