The old Australian cast jointed farm gates from the turn of the 20th century are harder to find but as popular as ever due to the nostalgia around owning a heritage gate like those on our grandparents and great-grandparents old farms. Demand for old gates for sale has pushed prices quite high despite them being in really bad condition. We are often asked about restoring old gates but quite often the old “drag & drop gates” as they were once known, are not economically viable to fix. The bottom bars are usually rusted away, rails badly bent, and castings irreparably cracked. In many cases buyers have had no idea of the extent of damage or end up buying poorly restored heritage farm gates. The alternative is to buy a reproduction which is indistinguishable from the old heritage gates, with castings moulded from original Sunshine McKay or Simpson gates. If the gates are made with the same old fashioned workmanship, as they are here at Farmweld, it should hold it’s value for decades and become another heirloom for generations to come. 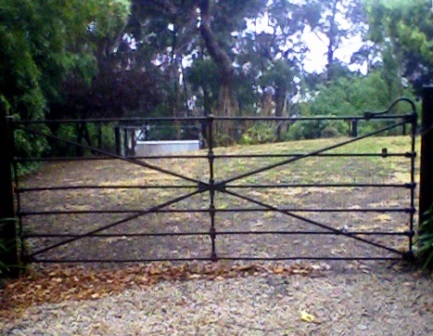 This HV McKay gate is in reasonably good condition.

Not all cast jointed gates are made by Sunshine McKay

Cast jointed farm gates were made around the turn of the last century. They were originally made by companies such as Sunshine McKay, Simpson and Cyclone as well as many smaller independent foundries. Simpson and Sunshine McKay (HV McKay) may simply be more familiar to modern collectors and renovators as the names of these two companies were sometimes embedded in the centre casting and all the other small foundries have long since been forgotten. As a result the most commonly sought after gates are those made by Sunshine McKay in Victoria & Simpson in South Australia.

Possibly an old Simpson gate, on display at Goolwa, SA 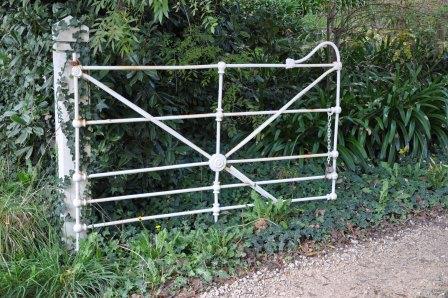 There are many variations of cast jointed gates, some with plain knuckles, some patterned,  some with solid steel bars and others with twisted wire strands within a pipe frame. The centre discs varied greatly and there are some really pretty ones out there.

Buyer beware, is it worth restoring an old heritage gate?

Cast jointed gates were fondly known as ‘drop and drag’ gates by the oldies who grew up with them. The weight of these old heritage gates  moved the timber posts on which they were mounted. However I think our forebears quite often liked to climb and swing off them too, so that wouldn’t have helped. As a result these old gates would end up on the ground, having to be lifted and dragged across the driveway. The bottom of the gates usually sat in long grass and mud, eventually rusting away. It’s not surprising that few numbers of these heritage cast iron gates are around. Most are in really poor condition but despite this they’re still fetching high prices. I recall seeing a pair of 2.4m gates (8′ in the old imperial measurement) in very poor condition on Ebay going for in excess of $2500. These prices were for gates that were pick up only, which would have restricted the interest in buying them, and lowered the bid price. So if you’re chasing a set of original gates and the seller is offering shipping, expect to pay a lot more. 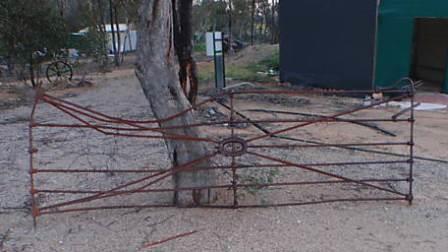 This sort of damage is quite common on old Sunshine gates.

We get a number of heritage gates brought to Farmweld for restoration. Sellers lead people to believe that their gate can be fixed, however quite a number of old cast jointed gates for sale are irreparable, but the true extent of damage isn’t evident until the gate is sandblasted – which needs to be done to clean off the loose rust and old paint. If you’re lucky enough to have found a gate which looks like it’s in reasonably good condition you may still find that it needs serious restoration work as much of the rust on the gate or cracks in the castings, may be hidden under paint. So be careful of what you buy, unless you’re prepared to spend considerable money on repairs.

If you’re looking to buy a restored gate be careful of dodgy repairs – you’d be surprised what a thick coating of paint can hide! There are quite a few unscrupulous people who will do a quick “slap and tickle” job with a paintbrush, just to make a quick buck. You might end up with a gate that:

Many old cast jointed gates need a fair amount of restoration, many having badly bent, rusted out bars or damaged and missing castings. The bottom bar in particular is usually bent if not rusted away partially or completely and if not fixed by a reputable and knowledgeable person you could end up losing quite a bit of money.

Do you want a new, old gate?

Farmweld’s cast jointed gates are made using modern techniques. We’ve kept the tradition by using cast iron joints but the bars are made from steel pipe rather than solid bar, so they’re not quite as heavy as the originals. Don’t get me wrong, the gates are still very heavy in comparison to the other Heritage Style Country Gates in the Farmweld range. Because they’re so heavy the gates are made to a maximum length of 12’ / 3.6m and are shipped on pallets which adds slightly to the shipping cost.

Farmweld’s cast jointed gates are available with two types of castings, plain and ornamental. The centre pieces differ, the plain one has a bow shape and the ornamental one a disc with a floral motif. The standard length is 8’/2.4m through to 12’/3.6m, with smaller gates available with the round ornamental centre and no diagonal bracing or handle. The handle casting includes the corner piece so the diagonal bracing can only be set at an angle to accommodate the larger gates.

Sizes start from 1.2m/4’ through to a maximum length of 3.5m.  You can find more information in a previous blog article, Heritage Cast Jointed Gates  and under the Horizontal Bar Gates category in the main website menu.

If you’re after an authentic looking cast jointed gate, Call Us or fill in the form on the Contact Us page today.